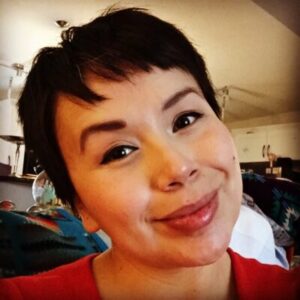 Csetkwe (Pronounced: chuh-set-quah) (Meaning: Lights Reflection on Water)
Csetkwe is a multi-gifted artist with her roots in the Syilx (Okanagan) and Secwepmec (Shuswap) Nations. Holding the responsibility and respect of being stamia (two spirit), a sqwuy (mother to sons) and a Traditional Knowledge Keeper, she mainly represents in Live Arts and Visual Arts. She is a graduate of the En’owkin Centre of Indigenous Art, receiving a National Aboriginal Professional Artists’ Training certificate and Nsyilxcn Language Program certificate. She honed her love for performance art during her time in the Full Circle Ensemble Program in Vancouver, BC.

Csetkwe’s performances include those of a Singer/ Song Carrier, Spoken Word Poet as part of the k̓ wem k̓ wem słénsłénəy – Indigenous Female Drum Collective and as the former front woman in multimedia performance collective Skookum Sound System. As a visual artist, Csetkwe is grateful to contribute to the Kama Collective and Ullus Collective. 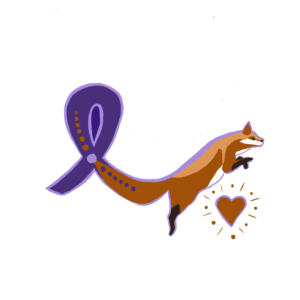 Purple Ribbon Campaign
The Purple Ribbon Campaign is an annual campaign to raise awareness leading up to International Opioid Overdose Awareness Day on August 31.  The campaign focuses on sharing resources, promoting discussion, and offering information related to the drug and opioid crisis and is a response to the urgent need to address the stigma that surrounds drug use.  Through raising awareness, the campaign supports healing and creating change within our communities and our Nation. Okanagan Nation Alliance aims to reduce overdose by promoting harm reduction and safe spaces to talk about mental health & addiction, reducing stigma and shame, raising awareness, and supporting healing.
Menu