“…we have never given up our rights to our mother, our mother’s resources, our governments and our religion; we will survive and continue to govern our mother and her resources for the good of all for all time.” ~ Okanagan Nation Declaration

The Columbia River Treaty (CRT) is a transboundary water storage treaty, between Canada and the US, that has two major components: holding back 15.5 million acres/feet of water for flood control, while also optimizing hydroelectric energy production in the Columbia watershed every year. The Treaty resulted in the Province of BC storing a large amount of the annual spring run-off behind three Canadian dams (Duncan Dam, Hugh Keenleyside Dam, and Mica Dam), that flooded the Slocan Valley (Arrow Lakes) and converted the Upper Columbia watershed into a massive reservoir system, flooding an est. 270,000 acres, forever altering the environment. This storage of water has generated millions of dollars of revenue, the majority of which largely goes to the Province of British Columbia as annual general revenue. However, it was developed and agreed upon by Canada and the US without consultation, involvement or consent of the Syilx Okanagan Nation. This exclusion of Syilx Okanagan peoples in the original Columbia River Treaty process, alongside its dams and their impacts, represent one of the most significant and on-going infringements of Syilx Okanagan Title and Rights.

In 1964, the Governments of Canada and the United States entered into the CRT, which altered river flows and ultimately commodified the international river system of the Columbia Basin. This is one of the largest infringements on the Syilx Okanagan territory and has profound and lasting impacts on Syilx Okanagan people, Title and Rights, territory and way of life. 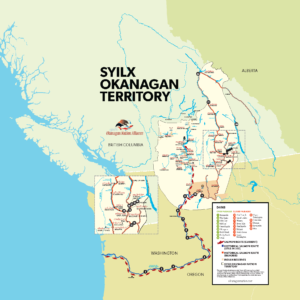 Over the decades, the leadership provided by the Syilx Okanagan Nation’s Chiefs Executive Council (CEC), guided by Syilx Okanagan knowledge keepers, advisors, and language speakers, ensured the Syilx Okanagan Nation was not excluded from the CRT negotiations this time around. In 2018, Global Affairs Canada made an initial unilateral decision to exclude the First Nations from direct participation in the US-Canada CRT Renegotiation process between Canada and the US.

Through the hard work and dedication of Syilx Okanagan leadership and staff, the deputy PM and Minister of Global Affairs Canada, Minister Freeland reconsidered this previous decision and in April 2019, gave us a seat at the US-Canada CRT negotiation table. This was a hard-fought achievement which included legal intervention, advocacy and negotiation support. The Columbia watershed covers British Columbia on the Canadian side and extends into the US into Washington, Idaho, Montana, Oregon, Nevada, and California. The Syilx Okanagan, in addition to two other Columbia Basin First Nations (SNTC and KNC) have worked to advance First Nations interests within the CRT – this approach is also known as the “Tri-Nation Approach”. By working alongside with other Columbia Basin First Nations, we have been well positioned to participate in the negotiations process and ensure that the Nation’s Title and Rights in the Arrow Lakes are protected, and our Syilx voice is heard in the CRT process – for the first time in history.