“We have always believed that developing mutual solutions leads to greater certainty for all. This is truly a historic day for our communities; one that will set the stage for recognition of our unique and enduring connection to our lands.” Chief Daniel Manuel, Upper Nicola Band.

BC Hydro is the largest and most impactful company operating within Syilx Okanagan Territory. They run 12 hydroelectric dams, maintain over 3,000 km of transmission lines, and produce over 50% of all of BC’s electricity on the territory. Since 2001, the Okanagan Nation Alliance (ONA) Chiefs Executive Council (CEC) had been directly engaged with BC Hydro, and work was focused on addressing the on-going and past infringements while ensuring that the impacts of future projects and activities are minimized. It has also been a priority that the Syilx Okanagan Nation and its communities capture significant benefits from some of these activities now and into the future.

In the late 1960’s, BC Hydro cleared a right-of-way and built two high voltage transmission lines and substations in Syilx Okanagan and Nlaka’pamux Territory to supply the lower mainland with electricity from hydro-electric dams on the Columbia River without adequately consulting, involving or accommodating the First Nation’s Title and Rights. At the time, BC Hydro anticipated adding an additional third transmission line at a later date. That date came and the new 500 kV transmission line – the Interior to Lower Mainland Line (ILM) which goes from Merritt to Coquitlam – was planned in 2005 and scheduled to be built by 2013. In 2007, the ONA, Upper Nicola Band (UNB), and Nlaka’pamux Nation Tribal Council (NNTC) united to defend and protect Title and Rights regarding the third line. The ONA, UNB and NNTC worked consistently, diligently, and strategically to ensure meaningful engagement took place and that Syilx Okanagan Title and Rights were respected. A major turning point was when the British Columbia Court of Appeal agreed with Upper Nicola, ONA, and NNTC that meaningful consultation and accommodation had not occurred with respect to one of the major permits for the project. This helped lead to multiple years of negotiations to try to find a collaborative outcome. 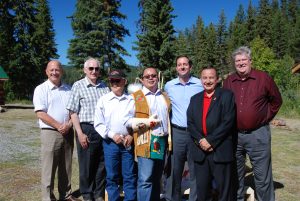 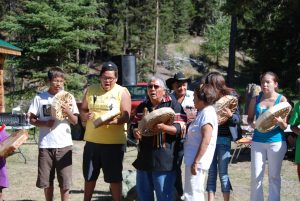 Image Descriptions: August 26, 2011 at Glimpse Lake at the signing of the ILM agreement and Enduring Relationship

By 2011, the ILM Agreement was enacted to define ways that the UNB, ONA and member communities would provide support for the project and receive certain benefits and opportunities from it, but also to advance a relationship of mutual respect and enhance collaborative working relationships. This became the Enduring Relationship and it was outlined in the ILM agreement that the Nation and BC Hydro would develop and implement a new engagement model for BC Hydro operation within Okanagan Nation Territory. The ILM agreement and the Enduring Relationship were signed between the Nation and BC Hydro on August 26, 2011 at nkwr’itkw (Glimpse Lake).