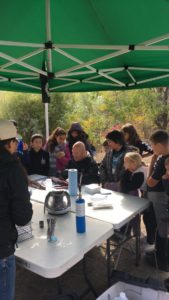 In 2017 a total run of 25,000-35,000 sc’win (Okanagan sockeye salmon) returned to the fishing grounds. High summer flows provided ideal conditions in suwiw̓s (Osoyoos Lake) and q̓awst’ik’ʷt (Skaha Lake), where salmon held until now when they ready to spawn. This year’s return of sc’win is entirely natural origin, offspring from the 2013 run in which no hatchery fry were released. Optimal river conditions have increased survival for migrating salmon.

Broodstock, the collection of eggs and milt, began on October 2nd and depending on the amount of spawners will finish towards the end of October. The collection is taking place in Okanagan River, near Oliver, BC. Even with such a moderate Sockeye run, the kł cp̓əlk̓ stim̓ Hatchery will still be in full broodstock operation with an expected egg take of 3.5 million. With the low returns we anticipate to still achieve the egg numbers.  This egg take falls within our conservation limits for taking 10% or less of the spawners for broodstock. 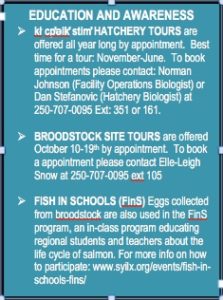 population, returning them to their former habitat and migration range, and to revitalize the Okanagan Nation salmon fishery. The kł cp̓əlk̓ stim̓ Hatchery produces Sockeye Salmon as mitigation for habitat loss due to hydro-electric dams on the Columbia River. Recent fish passage mitigation at McIntyre Dam has resulted in fish access into Skaha Lake and Penticton Channel; as such the effects of hatchery production on kokanee are a concern as are key questions for research requiring regulation of adults into the study stream. In order to comply with program needs (broodstock/egg collection) and minimize hybridization effects to kokanee, a problem statement has been identified that identify actions to enable collection of local broodstock and manage hatchery fish on the spawning grounds.