In 2008, BC Hydro implemented a 10-year project designed to monitor the effectiveness of the Bull Trout transfer program at Duncan Dam (DDM) on the lower Duncan River. Fish transfer procedures – delaying the timing between the opening and closing of upstream (maintenance) and downstream (operating) gates respectively – are operated between the end of May and the end of September to allow the passage of adult Bull Trout (Salvelinus confluentus) from lower Duncan River into the Duncan Reservoir.  The operations have been in effect (in varying degrees of extent and timing) since 1968, a year after impoundment.  Bull Trout passing through the dam are known to spawn in at least three reservoir tributaries:  Upper Duncan River main stem, Westfall River and Houston Creek (both are tributaries to Upper Duncan River) (O’Brien 1999).  However, it is unknown if recruitment from those spawners contributes to the Bull Trout population below DDM, or if these recruits stay in the Duncan River watershed above the dam. The initial 2 years of the program were implemented in 2008 and 2009 (BC Hydro 2008).

The key management question intended to be addressed by the monitoring program is:

“Does the bull trout transfer program contribute to the recruitment of bull trout to Kootenay Lake or Duncan Reservoir?”

To answer this question, the following questions need to be addressed:

The study will also address the following management question for consideration in future water planning processes:

“What changes to the bull trout transfer program are recommended to improve bull trout production in Duncan Reservoir and Kootenay Lake?”

Opportunistic bull trout otolith sampling will be sought through a recreation-fishery survey and collection annually in each reservoir. Analysis of otoliths will determine life histories in each river system. It is assumed that any head collection program will collaborate with concurrent biological monitoring programs in either Kootenay Lake or Duncan Reservoir to maximize the efficiency of the program. 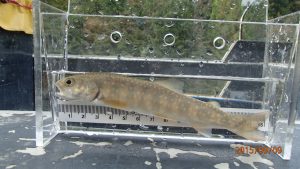 Currently in the reporting year of Year 3 – Year 4 analysis will begin in 2017.