The Environmental Flow Needs (EFN) Project is a collaborative project between ONA, Ministry of Forest, Land, and Natural Resource Operations (FLNRO) and the Okanagan Basin Water Board (OBWB). The goal of the project is to develop Environmental Flow Needs (EFNs) (“target flows”) and Critical Flows (“minimum flows”) for water management in Okanagan streams. A list of 19 priority streams was developed collaboratively at the beginning of the project.

Phase I of the project consisted of developing methods for EFN setting, and included a literature review of EFN methodology and historical information gathering for Okanagan streams. A report with proposed methods has been distributed, consisting of two components:

Phase II of the project is consists of implementation of the methods, including field data collection and development of EFNs for Okanagan streams based on the methods developed in Phase I. All 19 streams will be assessed via method (1) (desktop exercise) but since there is not sufficient funding to do a full field study on all streams, 11 streams were prioritized using a ranking system for assessment under method (2) based on the following criteria:

The streams that are measured in Phase II of this project include:

Phase II of the project is mainly conducted and delivered by ONA with support from the bands. Fish Habitat Transect sites were established in all 11 streams between July and August 2016. Study sites include up to 10 transects per stream, including riffles and glides. In addition, a total of approximately 24 hydrometric stations, including 2 real-time stations, were installed and will be maintained at least throughout the life of the project.

It is anticipated that EFNs and critical flows to be used in water licensing and drought management decisions by FLNRO will be developed in a workshop or series of workshops following completion of Phase II. This process has been identified as Phase III of this project. 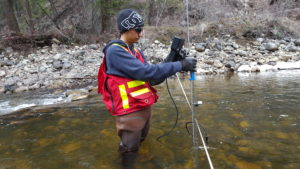