White Sturgeon (Acipenser transmontanus) in the upper Columbia River in British Columbia, Canada, was listed as endangered under the federal Species at Risk Act (SARA) in 2006 as the population is undergoing recruitment failure. One segment of the population resides in the Mid-Columbia River, which is a section of the upper Columbia River located between Hugh L. Keenleyside Dam (Castlegar, BC) and Revelstoke Dam (Revelstoke, BC). This small population segment is comprised of approximately 52 adult White Sturgeon (37 – 92 individuals at 95% confidence level) that are older than when the construction of HLK Dam occurred (1969). Natural recruitment to this population has not been identified. In 2007, BC Hydro began an experimental conservation aquaculture program that has released hatchery-reared juvenile White Sturgeon into the Mid-Columbia River. This program has been ongoing in an attempt to evaluate the feasibility of developing either a self-sustaining or failsafe population in this section of the upper Columbia River.

As of 2017 we are in year 5 of the study and will be working with BC Hydro to continue monitoring the Arrow Lakes population in the future.

The main objectives of this study are to 1) describe juvenile White Sturgeon habitat use, including quality and quantity within the Mid-Columbia River, and 2) determine growth and survival of juveniles released from the conservation aquaculture program. These objectives have been assessed in previous years through both direct (capture efforts) and indirect (telemetry) methods, though direct capture was the focus of the study years reported here.

Gillnet and set line sites were established randomly using the general random tessellation stratified (GRTS; Stevens and Olsen 2004) design in R (R Development Core Team). This method provides spatially balanced randomly chosen sample locations. Sites were randomly distributed along the center line of the Mid-Columbia River and distinguished as setline or gill net sites. Over sample sites were also created to replace sites that were rejected during sampling due to logistical concerns (depth, velocity, obstructions) to ensure that randomness and spatial segregation were maintained within the study design. The generated GRTS sites were used as a guideline, and once in the field, sample locations were selected based on targeted water depths (10 – 30 m).

Timing of sampling was targeted in the fall of 2013 (September/October) to coincide with movements (Golder and ONA 2013). Sampling times were expanded over summer and fall (July – October) in both 2014 and 2015 to exploit water temperatures optimal for foraging and expend additional sampling efforts. 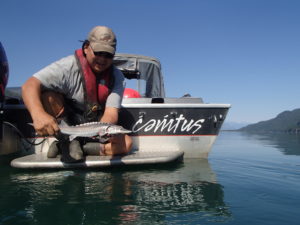