For the Syilx people, ki?lawna? (grizzly bear) is a significant part of our laws and protocols. ki?lawna?, as are other species, is an important part of our creation stories to our people reminding us of our responsibilities to our tmuxlawx (land). The decline of the population demonstrates that the health and security of the landscape is in dire need of protection. For generations, habitat fragmentation, ecosystem degradation and a number of other factors have contributed to the decline of ki?lawna?. As such, the ONA has been taking action to reduce pressures on ki?lawna? and recover threatened populations.

The ONA has hosted a number of meetings with neighboring First Nations and supporting agencies such as Conservation Northwest as part of a Joint Nation Grizzly Bear recovery initiative. The group’s main objective is to recover threatened populations of ki?lawna? within our Territories. ONA is excited to be seeing the results of positive working partnerships raising the importance of this work to ensure ki?lawna is recovered.

Most recently, in collaboration with ONA, Clayton Lamb at the University of Alberta Department of Biological Sciences, released the results of a new study that provides insight on the relationships between ki?lawna? and road density. The results of Lamb’s study provide a scientific foundation for access management and habitat securement for this iconic and culturally significant species in the Kettle Granby region. This information will support similar work in the North Cascades and other threatened populations in the BC Southern Interior.

The winter of 2017/18 will see the development of joint funding applications to support further engagement among the Joint Nation Grizzly Bear Recovery Working Group, and between the group and the Province of BC.

We will collectively continue to plan for improvements to habitat security and quality by working with forest licensees, recreational users, hunters and other land users to reduce the density of roads in important ki?lawna habitat.

Running Out of Room Infographic 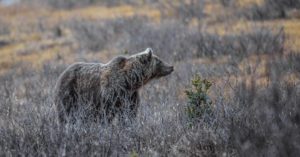