Northern Pike (Esox lucius) are a well-known top-level predator, native to most of Canada and USA east of the Rockies. Detected in 2010 in the Columbia River in Castlegar, they are suspected of originating from Montana and migrating downstream through the Pend d’Oreille system. Established populations now exist in the Robson Reach and the Kootenay River confluence areas, as well as downstream throughout Lake Roosevelt. Northern Pike have a diet preference for soft-bodied, soft-rayed fish like trout and salmon, whitefish and minnow species. Through ONA’s suppression efforts, we have caught Pike up to 27 lbs (female) and have heard of captures over 30 lbs from the upper Pend d’Oreille. Pike of that size would have no problem consuming a 4 lb Rainbow Trout or Sockeye Salmon!
Pike prefer shallow, warm and weedy habitats, but are able to adapt to the riverine habitat in the Columbia, or steep-sided, rocky habitat in Lake Roosevelt. They have been documented moving further downstream in the Columbia each year. A primary concern is that they will migrate past Grand Coulee and Chief Joseph Dams and reach the “Anadromous” zone – the upstream limit of ocean-going salmon. Once into this zone, they will then have access to the Okanagan River and the Osoyoos, Vaseaux and Skaha Lakes – all of which have ample shallow, weedy and warm habitats. The risk that Pike may enter the Okanagan River system is high, highlighting the urgency for suppression and monitoring efforts in the Columbia and Pend d’Oreille Rivers.

The Okanagan Nation Alliance Fisheries Department is recognized as the lead by Canadian agencies for suppression and monitoring in the Columbia River (Pend d’Oreille, Kootenay, Columbia and Kettle Rivers). Our suppression efforts focus on pre-spawn adults in Spring, and adult, juveniles and young-of-the-year in Summer and Fall. Capturing pre-spawn adults is an effective method of suppressing the population; a mature female can produce upwards of 9,000 eggs per pound of body weight – that means the 27 lb female we captured was capable of producing nearly a quarter-million eggs!

A key part of ONA’s Pike program includes early detection of Northern Pike in new water bodies and rapid–response suppression. For example, in 2019 an angler reported capture of a Pike (with photo proof) – ONA, working closely with Christina Lake Stewardship Society, activated a monitoring crew to sample likely habitats for Pike via gill-netting and electrofishing. No Pike were encountered during the rapid-response suppression, however, Christina Lake remains at high risk of Northern Pike establishment and will be monitored annually.
Early detection activities can include sampling accessible habitats where Pike are suspected. This can include sampling for eDNA (environmental DNA). eDNA is a new tool in species detection, where water samples are analyzed for body cells of specific species. An eDNA “primer” is developed by taking tissue samples from the species you are targeting. These samples were used by the team at the ONA Fish Health and Diagnostics Lab in Penticton (part of the kł cp̓əlk̓ stim̓ Hatchery) to extract DNA, and validate a pike DNA amplification assay that detects a unique DNA signature for Columbia Northern Pike. With this pike “signature” now known, Technicians can take water samples, filter the water, and have Lab staff analyze material on the filter to “search” for Pike DNA. This approach enables rapid and cost effect sampling of more locations to detect if Pike are present before we activate a large, and more costly suppression crew.

Other key elements of ONA’s Pike program include biological sampling. Biological sampling can include measuring weight and length and examining the gonads for sexing, maturity (ripeness), and fertility (number of eggs). We also take a samples from cheek bones (cleithrum) and ear bones (otolith) which show layers of annual calcium deposition and allow us to age individuals – much like rings on a tree. Confirmation of age by these structures (as opposed to fish scales, which are often inaccurate and unreliable for aging) when used with weight and length information can give us an indication of growth, fish health, age of maturity, fertility and allow us to compare these biological indices to other Northern Pike populations.
We also examine stomach samples for diet composition and parasites. Diet information is useful in showing what Pike prefer to eat, and give an indication of what species may be at highest risk of Pike predation. We can then focus suppression efforts in the areas where preferred prey may reside. Information on parasites in Pike is helpful in identifying another little-known risk factor to other, native species. Often invasive species bring other organisms with them that native species cannot adapt to; this may be the case with certain tapeworms or even viruses that Pike are known to carry. The ONA Fisheries Department is looking to develop more tools around these questions as our pike suppression and monitoring program continues. 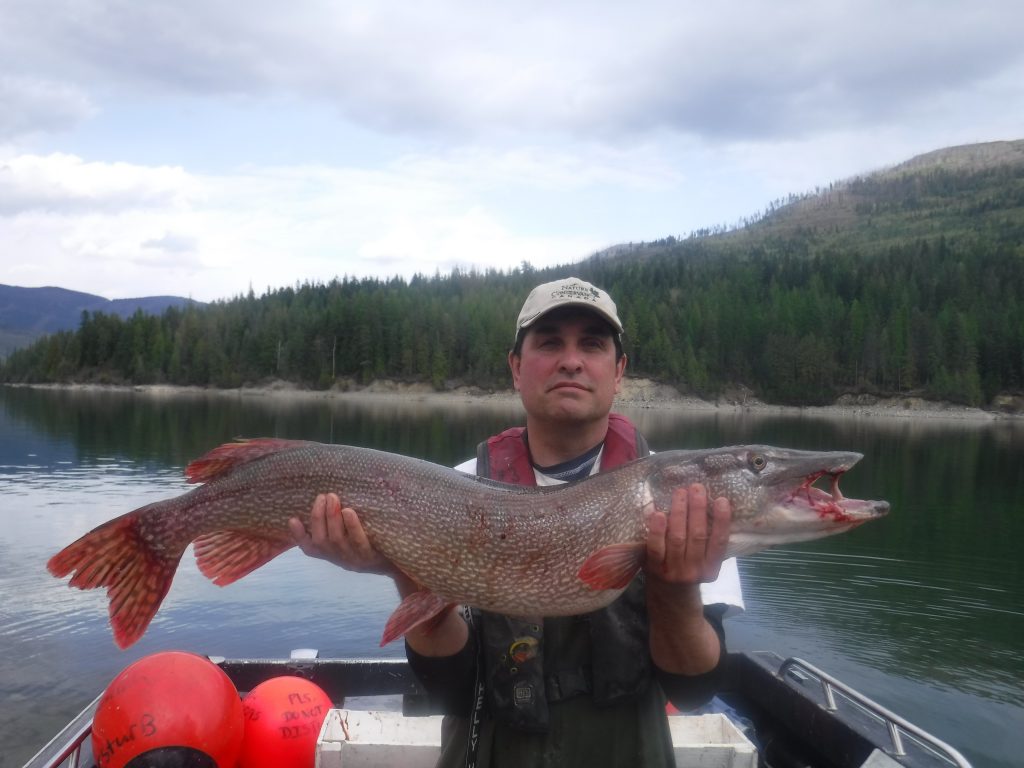 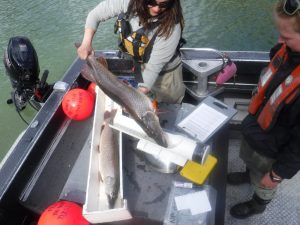