McIntyre Dam was built in 1954 to divert irrigation water and to control water flows in the Okanagan River between Vaseux and Osoyoos lakes.  McIntyre Dam had been the upstream migration barrier for Okanagan River salmon until it was refitted in 2009:

This provided an additional 11.5 km of spawning and rearing habitat in the Okanagan River and Vaseux Lake, which are historic habitats that were inaccessible for salmon in the last six decades.

The Okanagan Nation Alliance (ONA) in collaboration with the manager of the McIntyre Dam (Ministry of Forests, Lands and Natural Resources Operations-MoFLNRO) has being monitoring Sockeye salmon success to pass over new fish passage gates. The new gates allow passage for Sockeye of all sizes, but the jumping success can be improved through alteration spillway gate levels. ONA and MoFLNRO are working on ways to make it easier for the salmon to pass over the new gates.

Preliminary results have indicated more salmon jump attempts at the dam’s westernmost gate. This western gate has relatively lower Sockeye jump efficiency (number of successful jumps versus the total number of jumps) when compared to the eastern sections of the dam. In 2014, ONA experimental flow changes and gate closures at the McIntyre Dam have resulted in some diversion of the returning Sockeye to the eastern gates. Altering the spillway gates flow may allow for better management of Sockeye gate choice at the McIntyre Dam, which could ultimately increase Sockeye spawning success upstream of the dam.

One of the strategies to facilitate salmon to pass over the new gates is to lower the forebay (upstream of the dam) water level of 1 foot. This will reduce the height of the jump required to pass over the gates. MoFLNRO will lower the forebay water level and, consequently, the level of Vaseux Lake of 1 foot during the sockeye salmon migration (starting on July 15th , 2012). ONA studies of the dam water flow indicate more optimal flow rates for Sockeye at approximately 2-2.5 m3/s at McIntyre Dam during migration. Increasing the water flow to 3.0 m3/s prevents fish jump staging areas below the dam due to bubble penetration to bottom. This more optimal flow can be achieved at more of the dam’s gates if the water level of Vaseux Lake is lowered, ideally prior to Sockeye spawning season. 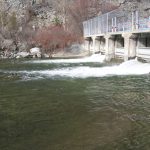 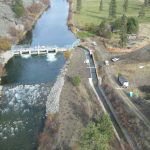 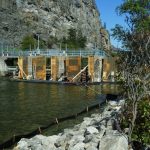 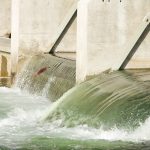 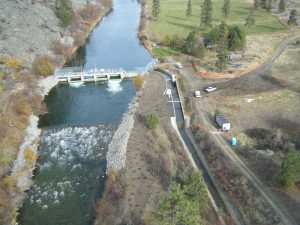