Since 2012, ONA has been tagging a portion of Okanagan sockeye smolts with Passive Integrated Transponder (PIT) tags. Starting in 2016, ONA, Grant and Chelan Public Utility Districts, and the Columbia River Inter Tribal Fisheries Commission have been piloting the use of purse seining to capture smolts to PIT tag.

Construction of permanent flood control dams in the Canadian portion of the Okanagan Basin in the 1950’s has blocked anadromous salmon from a significant portion of their historical range, which includes q̓awst’ik’wt (Skaha Lake) and kłusxənitkw(Okanagan Lake). In 1999, the ONA and Colville Confederated Tribes (CCT) initiated a research program, funded by Bonneville Power Administration, to evaluate the feasibility of reintroducing sockeye salmon into their historical range. A 3-year risk assessment of sockeye reintroduction was carried out by the Canadian Okanagan Basin Technical Working Group (COBTWG), whose participants include the Okanagan Nation Alliance, Fisheries and Oceans Canada (DFO), and the BC Ministry of Forests, Lands, and Natural Resource Operations (FLNRO). The risk assessment, completed in April 2003, concluded that the reintroduction of sockeye into Skaha Lake posed little risk to existing Okanagan sockeye and resident Skaha Lake kokanee populations.

The decision was made to introduce hatchery-reared sockeye fry into Skaha Lake as it posed little risk and would allow for in-lake monitoring of food web response. The COBTWG worked to develop and approve a 12-year framework for the experimental reintroduction of sockeye salmon into Skaha Lake, which outlines the project rationale, method of reintroduction, and a series of performance measures to address production, growth and survival of sockeye and kokanee. The 12-year adaptive management experiment was designed to be reversible if monitoring demonstrates significant negative impacts to either the existing Osoyoos sockeye or Skaha Lake kokanee populations.

Typically, hatchery-raised, thermal marked fry produced are released into Penticton Channel upstream of Skaha Lake. Sockeye fry spend one year in Skaha and Osoyoos lakes before migrating to the ocean. The migration typically begins in early Spring.  Understanding migration patterns and biological traits of sockeye smolts from both lakes is necessary for monitoring and evaluating the Skaha Lake Sockeye Reintroduction Program.  An important objective is to determine the migration timing, size, and age structure of wild and hatchery-origin sockeye smolts as they migrate out of Skaha and Osoyoos lakes into the Okanagan and Columbia rivers.

Since 2012, ONA has been implanting sockeye smolts with uniquely coded PIT tags. PIT tags can be detected and logged as they pass through antennae arrays located throughout the Columbia River.  PIT tags do not have batteries and will transmit codes whenever they are close to a PIT antenna. Therefore, tags are not constrained by battery life and can provide codes for the entire life-span of the salmon. From these detections, we are able to estimate smolt travel time and overall survival as sockeye migrate to the Pacific Ocean.  Ideally, a large number of PIT-tagged sockeye from this year will return as adults and be detected in the arrays as they migrate back to the Okanagan to spawn.  One goal for this project is to capture approximately 10,000 smolts to PIT tag. 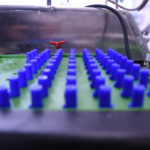 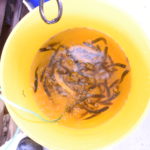 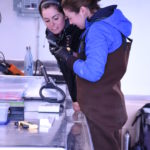 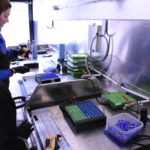 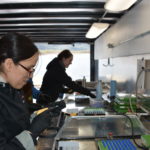 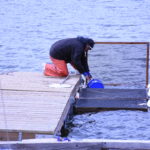 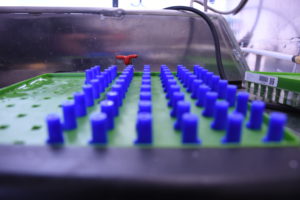 Purse seines will be conducted in the north (and potentially central) basin of Osoyoos Lake. The landing site is at the north end at the Baptiste property.

Department of Fisheries and Oceans (DFO)