Pass (Norms) Creek is the first major tributary to the Columbia River below Hugh Keenleyside Dam adjacent to the town of Castlegar, BC. Pass Creek provides approximately 2.2 km of important spawning habitat for Rainbow Trout (Oncorhynchus mykiss), Kokanee (Oncorhynchus nerka), and Mountain Whitefish (Prosopium williamsoni) migrating from the Columbia River. Previous habitat restoration and creation efforts on the creek included rip-rap armoring along the streambank and the installation of artificial log jam structures to provide cover for rearing fish. In 2012, high flows damaged and dislodged some of these structures resulting in broken/loose cables and exposed nails, presenting a concern for public safety. The high flows also undermined the streambank adjacent to the Pass Creek Regional Exhibition Grounds, resulting in an exposed, failed bank prone to erosion and sedimentation. From 2013 to 2015, the Okanagan Nation Alliance (ONA) investigated the effects of the 2012 high flows and developed a number of projects aimed at addressing the failed bank, structures and lack of fish habitat along Pass Creek. In the summer of 2015, the ONA repaired the two eroded sections of rip-rap bank, removed damaged and hazardous log structures, and created additional fish habitat in Pass Creek. The ONA also completed a riparian planting project adjacent to the treatments areas within the stream.

Goal 4: Establish a riparian area along the exposed section of streambank adjacent to the Pass Creek Exhibition Grounds.

The site was accessed through the Pass Creek Regional Exhibition Grounds. Selective brush above the rip-rap bank was removed in order to access the eroded areas of the bank. The existing rip-rap remained in the eroded areas was removed and the slope re-graded from a 1:1 to a 2:1 using a series 200 excavator. Once the desired slope was achieved, non-woven geotextile fabric was placed over the area to protect the mineral soil. Fabric was placed from bottom to top, downstream to upstream overlapping at least 0.3 m. Geotextile fabric was cut with excess to compensate for folds and slipping while rock was being placed.

Rocks were placed individually and in small groups by an excavator (Fig. 4a). Smaller rocks (> 0.24 m baxis) were placed by hand to fill small gaps and ensure the geotextile fabric was completely covered by rock (Fig. 4b). Rocks were placed from bottom to top, and were not dropped from more than 0.3 m to avoid damaging the geotextile fabric. The largest rocks (1 m+ b-axis) were placed at the toe and mid-slope to increase stability. Smaller rocks (0.24 – 0.50 m b-axis) were then placed on top to protect the rest of the slope. Planning rock position prior to placement and individual placement creates a stronger structure more suitable for bank protection. Boulders were supplied and placed by Kabatoff Sand and Gravel Ltd. Rock material was previously approved for metal leaching/acid drainage, making it safe for aquatic use. All work on the rip-rap bank was conducted during the 2015 in-stream work window (July 15 – August 15) and was monitored by a qualified environmental technician.

Habitat structures that required removal from the stream were removed via excavator during the 2015 in-stream work window under supervision of a Biologist. Exposed nails on structures were hammered into the wood and loose or broken cables were cut using a cordless angle grinder or bolt cutters. All materials removed from the creek were taken off-site and disposed of in a waste management facility.

With additional funds from Columbia Basin Trust, rock habitat structures were created to increase habitat complexity in the reach and to deflect the thalweg from the rip-rap bank. The structures will help to reduce erosional force on the rip-rapped bank at lower water levels, and increase habitat for rainbow trout fry. The required boulder size was determined to be > 35 cm based on stream gradient and bank height (Ward 1997). Boulders were placed in the river via excavator from the top of bank during the instream work window (July 15 – August 15) to reduce impacts to rearing Rainbow Trout fry, and prior to the Kokanee spawning season. Work was conducted working downstream so changes in hydrology (thalweg) could be observed and taken into consideration before each subsequent structure was created. 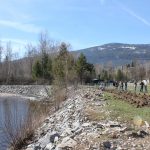 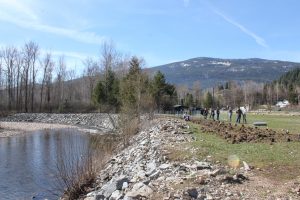