Prior to the Duncan Dam Water Use Plan project (DDM WUP), Duncan Reservoir operations were optimized for water storage to meet Columbia River Treaty (CRT) commitments, and to support downstream operations constrained by the CRT and fisheries requirements. In typical WUP processes, data collection during the project would help support assumptions around impacts of reservoir operations on key areas of interest. However, the project was limited in resources and time and was unable to collect much of the data required to support fisheries and aquatic objectives of defining operations that would improve ecological conditions in the reservoir. High level approximations of stranding risk and tributary access were considered but then eliminated from the process when they proved to be insufficient aids to decision making (see BC Hydro 2005).

At the conclusion of the DDM WUP project, the Consultative Committee (CC) recommended as part of the WUP monitoring program that the critical data gaps relating to fish use in the reservoir be addressed. This will ensure that future planning processes can integrate this knowledge to better accommodate fish requirements during future planning processes.

The end objective of this monitoring program is to determine how reservoir operations interact with fish and fish-food habitat uses. The primary objectives of this program are:

A large proportion of bull trout in the Duncan Reservoir, and that spawn in the Westfall River, are expected to be part of the Kootenay Lake bull trout population, since annual transfers of bull trout through Duncan Dam have occurred since the dams’ construction. Bull trout redd surveys will be conducted in the Westfall River in mid-October. Surveys will begin downstream of the barrier previously identified at ~21.2 km upstream of the confluence with the Duncan River. Surveys will terminate at the FSR Bridge at ~ 6 km upstream of the confluence. The lower 6 km of the Westfall River will not be surveyed, as very few redds were observed in this location in 2011, little spawning habitat is available, and access and egress is difficult due to the steep slopes.

Redds and adfluvial fish will be geolocated as per the same methods used for other Kootenay Lake redd surveys. Water temperature, discharge and visibility will also be noted. These provide information on the reliability of the surveys. Surveys conducted at low discharge in clear water when visibility is excellent are most reliable. The timing of the surveys will be scheduled for a time when river discharge and turbidity are expected to be low.

A two person crew will be used for the aerial survey, with one person sitting at the front left and the other person sitting directly behind. The helicopter will move slowly upstream at a height of approximately 20-30 m above and perpendicular to the river so that both crew members have a clear view. The enumeration crew will record a total count for the watershed, as well as separate counts at discrete locations that can be used for determining observer efficiency. These locations will be discussed with the crew conducting bank counts.

Observer efficiency will also be assessed by taking high resolution photos or video of discrete sites from the helicopter and analyzing these in the office. A two person crew will be used to conduct the bank counts. Crews will walk slowly in an upstream direction at the site, and each crew member will count kokanee separately. Counts will be compared during, and at the end of the survey, to ensure that accurate counts are obtained. In past surveys, individual counts were found to only differ by a few kokanee, and an average count was used when there was a difference in counts that could not be explained by other factors. 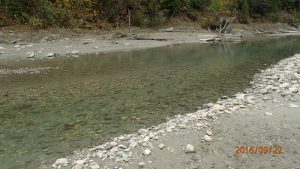