Since March 9, 2022, the ONA has received several reports from Anglers who have caught and identified juvenile and sub-adult chinook salmon in the eastern portion of Syilx territory — including in the Lower Arrow Lakes, on the Columbia River down river from the Keenleyside Dam and in the Waneta area.

To date (May 12, 2022) we have three confirmed chinook catches from local anglers in the following locations:

On March 15, 2022, an angler delivered the suspected juvenile chinook caught on Lower Arrow Lake to Castlegar office staff. The fish was confirmed to have a PIT [passive integrated transponder] tag.  After searching the known PIT tag databases they yielded no “hits”. The tag number was sent to UCUT Salmon Reintroduction scientists and confirmation was made by them was that this chinook was part of a Spokane Tribe pen culture program in the Spokane Arm of Lake Roosevelt, released as a yearling on March 23, 2021. We have photographs and skeletal carcass of the fish caught at HLK dam, and only a photo of the one caught at Waneta.

In order to ensure that ONA is taking the lead in monitoring these Chinook salmon in the Upper Columbia, we have had to accelerate the 2-year-old idea of developing a Columbia Salmon Community Initiative (CoSCI), and begin this immediately. ONA is also inviting select guides and anglers, and holding in-person information sessions covering: Columbia salmon story (past, present, future); ingredients in the CoSCI kit and purpose; DNA sampler and how to properly use. To date (May 12, 2022) five (5) kits handed out, under agreement. Three (3) more kits are prepared and have intended designates (not handed-out yet; pending aligned schedules).

For more information on this issue, or to report a chinook, please contact: 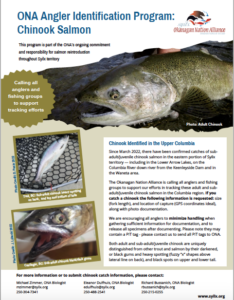